From a news article of the time. The caption read 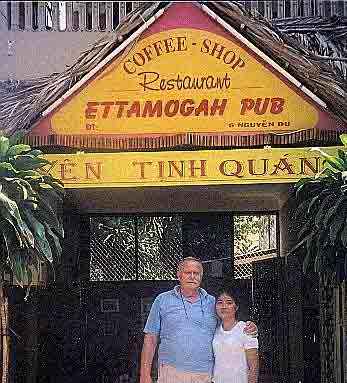 On the 20th: We are now in Vung Tau. Where dad was. Our motel has holes in the bathroom floor to drain water and massage girls (prostitutes) on the first floor. But we will keep clear.

We went to the Ettamogah Pub (not like the Ettamogah at home, just a small local bar where Aussies hang out), and we looked around at the old war photos. The end wall is made out of whiteboard, and all the ex-vets sign it when they come through. After I had a chat to them about dad they, asked me to write his name on the board, and my name as well. I asked if I could hang up the photo of dad. The owner of the bar is an Aussie, his Vietnamese wife took the photo, dashed off in to town, and when she came back she told me she had the photo enlarged, and framed. That was yesterday.

Today when we went there, off she went again, picked the photo up, and now a large framed photo, with his son's names on it is hanging on the wall here, to remember him .Visiting the Ettamogah Pub turned out to be a great way to leave a memory of dad.

There have been lots of other guys from dad's old squadron, who have been here and signed the wall . Now if they come past they will see his Vietnam picture as well. I was very excited when that was done. The lady paid for it herself. She refused to let me pay, she says it's to remember vets, and that if I wanted to give any money. then give it to the local orphans. She won't take my money.

Ryan and I are having a sleep this arvo. It's very hot here and I have been surviving on strong pain-killers. Also had a bad stomach ache and a fever I can't seem to shake. A few headaches (normal for me) and covered in perspiration from the fever all the time.

We went to the heardressers today. Ryan had a haircut and I had a full haircut and face massage. The whole thing cost about 40,000 dong which is about $3.50au. The girls from the Ettamogah Pub gave us a lift on their postie bikes. We never would have found it on our own but the whole thing was great fun.

We walked around town tiday and found the local "Pho 24" store. They are a chainstore. We had pho for lunch again, plus some Vietnamese spring-rolls and spent about $4.00 on the whole thing.

Ryan is a chick magnet here, they just love him. Only yesterday two girls asked if they could become my daughters-in-law (marry Ryan). He is loving the attention 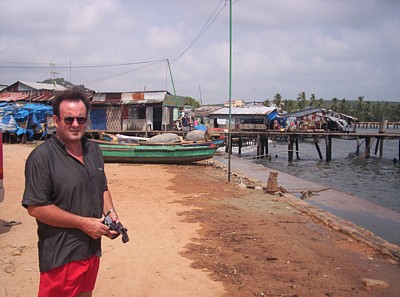 Our father once stood in this place during wartime. (probably minus the blue, plastic tarps)

21 Jan We are leaving here for Phu Quoc Island at 6 am tomorrow morning. We were surprised at how much we enjoyed ourselves here in Vung Tau. This place is very different from the rest of Vietnam. Today we zoomed around on a scooter, me driving .There was the painkillers, the traffic, and the Chinese made scooter which only had 3rd and fourth gears, and the most important part of a Vietnamese scooter.... the horn.. didn't work... Ryan was scared. He kept asking me to stop. He said he needs his skin. We had some close calls . We went looking for the Villa Anna where dad stayed for a while.. no good.

Last night we (and people from the Ettamogah pub) took dad out for his last trip around Vung Tau (his framed picture). We carted his framed picture around on local postie bikes. Took him to see local girls do Karaokeand enjoyed local eating spots..up these dark back streets. I think dad enjoyed it. His picture is now returned to the wall in the Ettamogah Pub, where it should stay I hope. 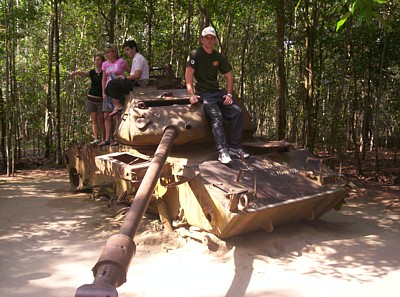 Ryan and I have one last dare-devil ride on the rocket (scooter) before we hand it back. The lady in the Ettamogah Pub, organised it. I just mentioned it, she made a quick call, and 10 minutes later a bike turned up for us. No licence, no payment, nothing, just gave us the keys. We will have to pay something, I believe it will be about 50000 dong for the day. That's less than $5 Aussie.

I am off to have a nap. trying to get well, so we can go and thank the people here for being so helpful with dad's things . I have an eye problem as well now and a sore throat, could be a few different things, but eyes are weeping non stop. I need a few weeks just sleeping, letting the body rest.I hope I don't have a bloody flu or something, am taking stuff, should be ok. We will be very sad to leave here.

The hull of a tank lies surrounded by jungle, probably the place it was destroyed. Ryan sits by the mantle.

Site by Weblight Studio (Australia) Photography by Rob and Ryan Solomons. All rights reserved. Contact Us